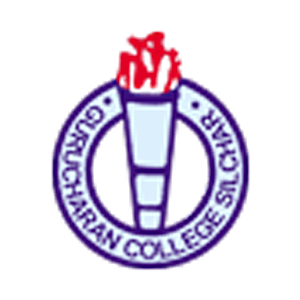 Gurucharan College, established on 15th July, 1935 is recognised as one of the premier institutions in the field of Collegiate education. It has carved out a distinct identity of its own in the field of higher education in the eastern part of India. The well-acclaimed reputation of the college stands not on its vast area of land, buildings constructed on it or on its enrolment strength but on its enriched academic & intellectual legacy built up during the time-span of 79 years of its life at the cost of effort and sacrifices of a batch of dedicated personalities who left no stone unturned to erect this huge edifice of higher education in this Barak Valley. Today, this institution of potential excellence is proud to have a large number of alumni who have established themselves in different professions and vocations of life in India and abroad.

Initially the college was housed in a Bungalow of one Late Promode Chandra Datta at Rongpur on the bank of the river Barak. When the river bank erosion began to swallow the college premises, it was shifted temporarily to the campus of Silchar Normal School. At that time, classes were held in the Morning shift. However, this temporary phase of crisis of accommodation was soon over. Guru Charan College began to receive generous help and assistance from different quarters and ultimately it was able to acquire permanent space in its present state of location.

In fact, Gurucharan College came into being on account of the far-sighted vision of Late Bishnu Charan Dey Purkayastha of the Department of Education, Assam. To give a shape to his vision of establishing a college here at Silchar, he got the support of Late Kiron Sashi Nag, the widow of Late Guru Charan Nag, who came forward with a generous donation of Rs. 10,000/- in 1934 for the establishment of the college. The college acquired its name after Kiron Sashi Nag’s husband Gurucharan and special emphasis was put on women education. This college was fortunate enough to have Arun Kumar Chanda, Bar-at-law and the son of Late Kamini Kumar Chanda as the founder Principal. Initially, the college had been affiliated to the Calcutta University. In 1949, the college was affiliated to the Gauhati University. With the establishment of the Assam University (Central) at Silchar, in 1994 Gurucharan College is now affiliated to the Assam University. Today, the college boasts of having a student enrolment of almost 4000 in Arts, Science, and Commerce stream taking into account H.S. and Degree students.

Besides these, from the academic session 2005-06, the college has come up with three UGC approved Career Oriented Programmes (value-added course) for the students conducted by the Department of Commerce. The introduction of different self-financing courses in the subject like Biotechnology, Computer Science (Pass and Honours), Diploma course in Bio-informatics and the Certificate courses in French Language and Human Rights are added chapters to the glorious history of the College. The newely-introduced BBA Course is yet another added feather to the crown of the college. Over and above, the college has housed various important centres of academic pursuits, viz. IGNOU, CDEOL. In 2007, Guru Charan College attained another milestone by receiving the recognition of the Counselling Centre for P.G Courses of IDOL under Gauhati University and every year a good number of students are appearing in the M.A., M.Sc., M.Com Examinations from the Gurucharan College Centre.

Having received the accredition from NAAC, Bangalore as A category along with the recognition of College with Potential Excellence by UGC, Gurucharan College is making immense contribution to the growth of higher education. This college of enriched heritage possesses well-equipped library with its large variety of books, journals and magazines, e-journals and INFLIBNET facility. The library also has collaboration with the Ministry of Culture, Govt. of India to assist in developing the Manuscript Resource Centre and National Manuscript Conservation in the library.

Since the day of its inception, under the able guidance of our founder Principal A. K. Chanda, Gurucharan College has inherited a very remarkable legacy of work culture, a sense of devotion and dedication which always inspires teaching and non-teaching staff to extend their whole-hearted support and co-operation for uninterrupted growth and development of this college. The objective of this college is : ‘To strive, to seek, to find and not to yield’.